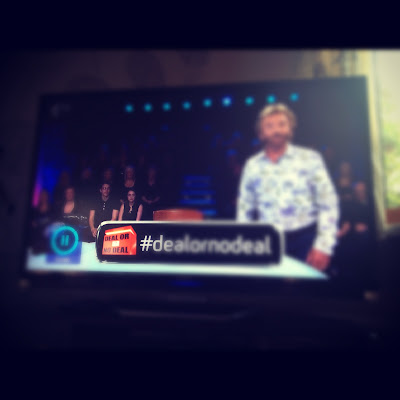 What have I been up too lately? Well nothing much. My little boy turned 6 months (where the hell has the last 6 months gone? wow.)

He is litterely the cutest little boy in the whole world not biased at all.

I have been shopping a lot too. Christmas is seriously hard on my poor bank account!! But I enjoy buying presents for other people and wrapping them up & seing there face’s after!

I went on deal or no deal as a pilgrim with my boyfriend and as they film 3 shows in one day we went to see 2. We could of gone too see the next one but we had to get back and in that ep they got free doughnuts! That is just my luck!

We were on the TV quite alot in both episodes and right at the front in the second one we saw, I was concious of the cameras the whole way through though! It was interesting too see what it was like when it was being filmed and Noel swore quite a bit throughout so they obviously cut lots of stuff off when they air it on the TV.

Not much other interesting things too say! I had a notice on here saying that If I want to upload anymore photos I have to pay £2.50 a month, has anyone else had this? I don’t really want to go back and delete photos because It’s my way of saving them too!!