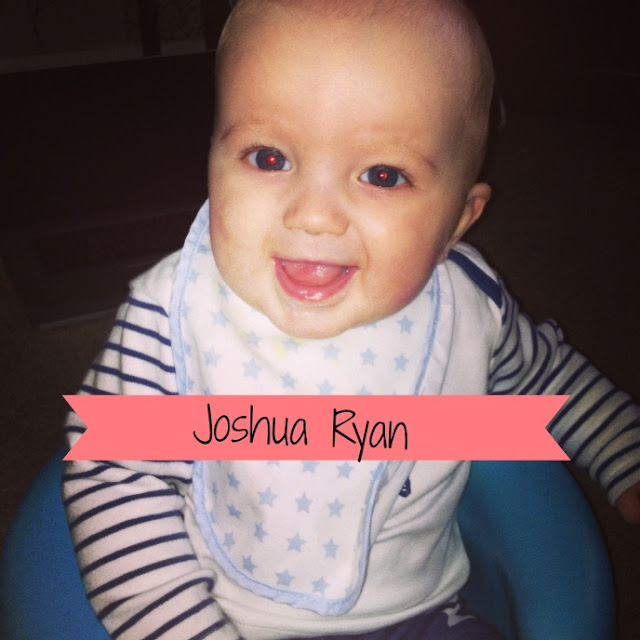 So how is he doing? Well hes a little bit slower (well lazy!) and not doing everything hes ‘meant’ to be doing.

A baby at 9 months is able to crawl and may begin to walk. He may take steps while holding onto a table or sofa. He may also try to climb up stairs. At 9 months, an infant will put hands forward while pointing head down, to keep from falling. Typically, he can sit for long periods of time and can pull himself up to a standing position. He learns to let go of objects with his hands and puts everything in his mouth. He can pick up small objects with his thumb and index finger, which allows him to feed himself. He will shake or throw toys.

He cant crawl, let alone nearly be walking. The only thing from that list he can do is sit up, but thats very very recent and he falls over after a couple of minutes! He can shake toys too, but he cant feed himself or pull himself up in a standing position!

The 9-month-old child will make sounds such as “da-da.” Such babbling, which is a combination of consonant and vowel sounds, later leads to formal words. A baby at 9 months will respond to her own name, and understands the word “no.” She will cry in different ways to communicate such things as, “I am hungry,” or “I am hurt.” At 9 months, the baby will look for a ball that has rolled out of sight and will search for something hidden beneath a container or blanket. The baby’s depth perception is beginning to develop around this age. She will spend a long time observing what’s going on around her.

He can say baba in fact thats all he ever seems to say! I wouldn’t say he 100% knows his own name yet either, I can tell when hes hurt himself from his cry’s but he doesn’t search for missing items, and he does observe a lot with things going around him but then again he always has done like every other baby!

I hate lists. I hate that they say what baby’s should be doing at certain ages because every baby is different and develops differently, it doesn’t mean there is anything wrong with Josh. I take him to the health visitor once a month (well I kind of slack at once a month maybe once every 6 weeks, and she told me last time that he has to be sat up the next time she saw him, and I just thought, how can I force a baby to sit up in time for my next visit? He will do so when he is ready, which he has done now!

I am super proud of his little 9 months in life and he will soon enough be 1/2/3 and I will be looking back at these and missing having my little boy! He is currently waking up every 20 minutes because he is full up with a cold, its so sad seing him trying so hard to breathe! I wish there was something good you could give a baby!