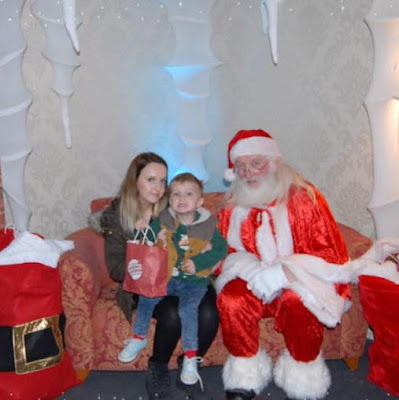 I love christmas time more than any other time in the world. I used to think being a child at christmas was the best and didn’t think anything could beat it, but I was wrong. The best thing at christmas time is being a parent and watching your child be so amazed and mesmerised by everything christmas related and it really has made my entire year. Joshua has seen father christmas four times this year!! I originally booked late in november for us to go and visit him in our local garden centre as thats where I took him last year and it was so magical and he loved it so I didn’t want him to miss out this year as he is older and understands a lot more.

He then came home with a letter from nursery about the school trip being at the celtic manor (a place I love take a look at my review of the christmas afternoon tea I had last year here) and it turned out it was going to be the day before I booked pughs which wasn’t the best timing as he would be visiting two different father christmas’s one day after the other and I was worried he would mention something but he didn’t he thought he was the luckiest boy in the world!

The celtic manor was lovely, you go in a few different rooms watching videos about the elfs, you get given your own ginger bread tree to decorate and eat (or take home and show nanny which is what Josh did) and have a visit from Mrs claus, then into a room where you write your own letter to father christmas which you can then post in the post box which josh loved! Then onto meeting father christmas where all the children were let in one by one which I liked as it meant his attention was just on josh and he can get quite shy with other people around. He got given a little bag with a teddy reindeer inside, and asked if he was a good boy and what he most liked for christmas, they then took photos and you were lead to a room to pay for the photos, but just outside there were reindeers which josh wasn’t that keen on but I thought it was a lovely idea. 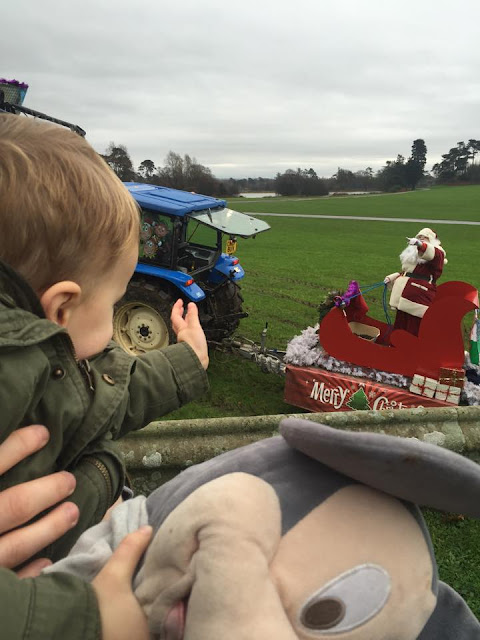 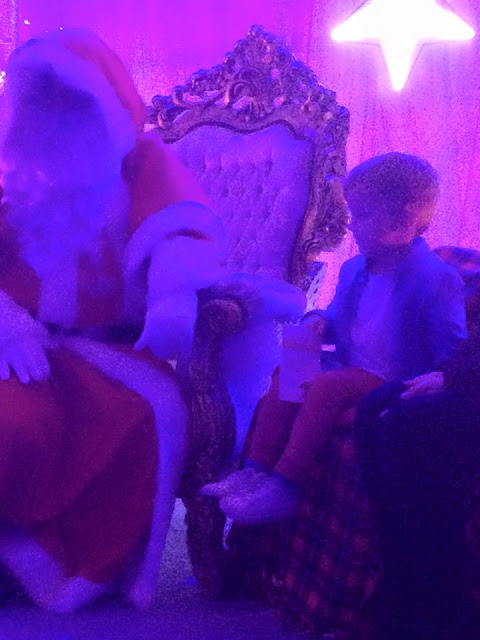 (sorry about the bad quality photo it was super dark inside!)

Lastly we took him to pughs garden centre. When we arrived they were running a little behind so told us to go for a wander and come back in a little while, Josh wasn’t impressed he was already really tired as he had his nursery christmas party that day and was a little grumpy. We got back and got given a ‘christmas boarding pass’ we then got lead to a room where you sat down and watched a video on flying to see father christmas, but most of the kids were pretty fed up watching the video and didn’t really understand we were meant to be on an aeroplane flying to see him. On to the next room and there was a snowball game where you had to try and chuck as many foam snowballs in the holes on the wall and I only managed two its a little to tricky for the young children and more of a game for the parents. Next was a winter wonderland walk where you sit on some chairs and listen to an elf tell you a story, but by the time there were lots of children crying and just wanted to see father christmas, once he had finished his story you got to sit in the elf’s bedrooms and then was finally lead to the main event of meeting father christmas. Completely different to the celtic manor you go inside in groups of 7/8 and wait on a bench in front of him until your name is called to sit next to him. Josh was super shy and didn’t really answer his questions as there was to many people watching him, he was really quick to jump up out of his seat when father christmas said goodbye and take his token which allows you a toy from the toy shop once your visit is over. We then headed to the toy shop where josh picked a car transporter which lasted two minutes before breaking!

I really have loved every minute of the christmas build up which Josh this year, he really seems to understand more, he understands if he is naughty he will go on the naughty list, and if he’s really kind and does something nice then he gets rewarded and his name gets to go on the nice list which means he gets to open lovely presents on christmas morning. I cannot wait to see his little face on the morning of christmas, and enjoy the day with all of our family.

What do you love most about christmas?