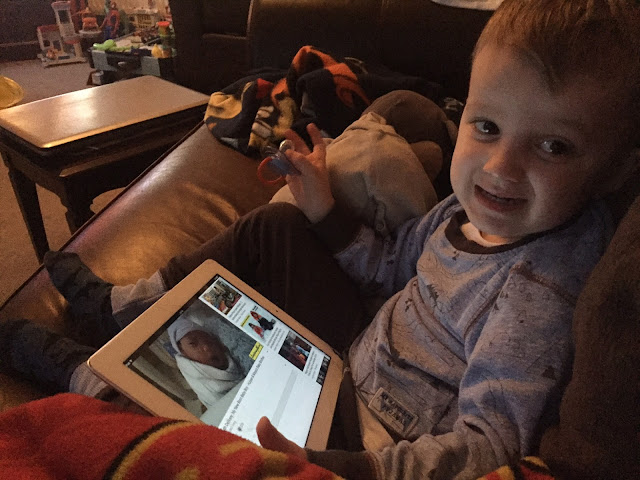 I do worry about Josh becoming a big brother because it will be such a massive change in his life. All he has known is just me and him (and obviously Will now too) but he hasn’t had to share me before and he does get a little jealous if I hold a friends baby or hold one of his friends hands. He will shout ‘no my mummy’ and do a super sad face until I let go or hand the baby back. Recently he has improved so much, two of my close friends have just had baby boy’s and we have been spending a lot of time with them as they also have three year olds who are Josh’s friends, and he has let me cuddle them for a good few hours while he plays!

With not only being pregnant and him becoming a big brother, all he has ever known is living at home with me and my parents and he is over run with attention from us. I do think he will struggle sharing that attention with a newborn baby. As we are moving into our own home I really hope it’s not going to be too much of a change for him and that he quickly adapts like he has done with nursery. He is obsessed with watching youtube videos on newborn babies and saying ‘Mummy look we will have one of those’ I think its the cutest thing in the world, he has been asking me lots of questions like; why do they cry? why do they have a bottle? can you wash his hair or will he cry? It’s really nice to see him take such an interest and he is obviously thinking about it lots, as the questions are random and come completely out of the blue.

I think I may invest in some books on being a big brother to read to him before he goes to bed in the  hope they help make him understand a little better. I have asked him what he would like to teach the baby and he gets so excited. He repeats things like;

Show him how to drink his entire bottle of milk

Teach him not to cry when he has his hair washed

Lastly which I love is he wants to show him how to cuddle up to mickey and use his tail as a comforter, which is what Josh has done since he was a baby, he idolises his mickey teddy and takes him every where with him and he wants his little brother to have the same as him

I really do have such a special little boy and I know that he will be such a lovely big brother even if it does take a little getting used to!

Do you have any tips?