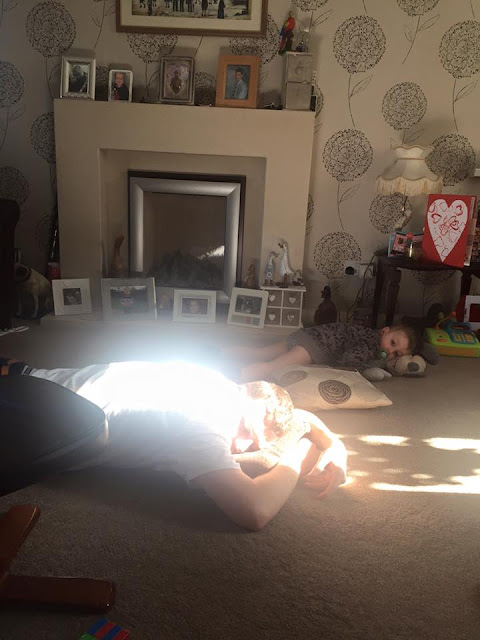 As i write this I am super sleepy (which should be the norm by now!) Pregnancy insomnia has hit me hard this pregnancy. I toss and turn all through the night, to my left side, my right side, lay on my back but nothing is comfortable. I just stare at the ceiling and see every hour tick by on the clock. I can’t remember it being this bad with Josh, but then I never had a three and a half year old who was up so early then, and a job that starts at 4/5am to cope with.

Josh will go to bed after a day full of play centres and running wild at 8pm maybe even later because he takes so long to fall asleep. He doesn’t have naps any more, and will still jump out of bed at 5-530am and force me out of bed to go and ‘cuddle and watch paw patrol’ After twenty minutes he is full on raring to go for the day, running around dressed as a fire fighter/batman/spiderman and playing pretend guns. This isn’t so bad when I have Will here to get up with me as he does run around with him while I lay on the sofa, but the majority of the time its just me and him.

I have tried the cry it out method but I couldn’t do it for long as I still live with my parents and I always feel super conscious of waking them up. My parents do their fair share of looking after Josh and getting up with him at 5am when Im in work. I am super grateful to have parents who suffer with being knackered so i can pop off to work for a few hours. I have tried a sticker chart, constant praising when he wakes up when its light but nothing seems to work. I think its just his body clock and no matter how tired he is he automatically wakes up. He is super tired then by 4/5pm and pushes his luck for a nap which I always refuse. I have told him that when he wakes up he can play with his toys in his room but he just wants to come and see and be with me.

I took myself off to the doctors to see if they could do anything for the lack of sleep I was getting. All they suggested was I take a week off work from exhaustion, but I see this as a short term solution. Although it may make me feel a little better after a week as soon as I get back to work I will be just as tired and drained as I usually am. I really do struggle to find the energy to do my job off no sleep and its getting harder each week, but I am trying my hardest to stick it out till maternity leave. I can’t remember the last time I woke up to day light, I don’t know how Josh has so much energy on such little sleep I wish he would give me some! All my friends have such amazing sleepers who are all the same age as Josh. They go to bed at 730 and wake up at 8am and I am slightly jealous. I guess when the baby arrives at least the complete lack of sleep you get with a newborn I will be used to!!

Do you have any tips?