I am so happy that we are finally home. Four days stuck in a hospital with an 8 week old baby is no fun at all. These last four days have been the hardest four days I think I have ever had to deal with. Watching my beautiful tiny baby, get poked and prodded all over the place was very upsetting. Hearing him screaming in pain was complete and utter torture. I also missed Josh ridiculously and it has been the longest I have ever been without him, even though I still saw him every day, it was only for a few hours. He loved his visits to see his little brother though, he wanted to stay and play in the toy room even when we were told we were able to go home.

He pretended to be a doctor, and once finishing checking Freddie he moved on to the babies (maybe a good career path!) He even took in baby Mickey to cheer up Freddie (and as you can see from the photo it worked!) We built a massive lego tower which he loved and it was just nice to be able to spend time with him. On to the results, we still aren’t really any clearer on why his temperature was so high. They said he had a ‘viral bug’ which the antibiotics cleared up. They tried to put another line in him yesterday, after his one in his head fell out for the second time. They tried for twenty minutes and it was heartbreaking to hear them screams. I couldn’t go in because I couldn’t bare to watch him in pain any more. Will went in with him, and I really respect him even more because he was with him every second of his procedures.

They decided to stop trying as they were basically just putting the needle in and guessing where a vein was. As his vein’s weren’t on show, and he looks butchered! They were trying his hands, feet and arm’s! He is covered in plasters, he really was a complete trooper and I am so proud of my little boy.

Our last night in hospital was spent eating my body weight in chocolate and cuddling up to him in bed. I really need to start my healthy eating now!! 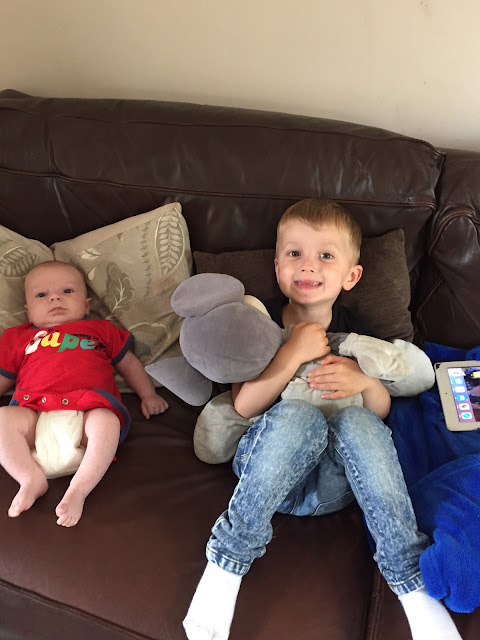 I now have both boys back on my sofa and I couldn’t be any happier. I am the luckiest girl in the world to have two happy healthy boys.