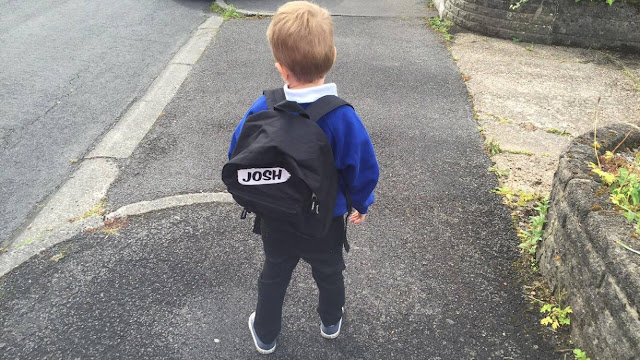 Josh started school in September and he really enjoyed it. He had a few friends from nursery that were in his class and that seemed to comfort him and allow him to enjoy the new environment well and he came home, and went to school with a smile on his face. Fast forward to now and its a completely different story. He was still going in fine, coming out really happy but it would come towards bedtime he would cry tell me that he was scared as people were fighting with him/pushing him around to the floor and calling him names. He was so distressed but as soon as he told me what was on his mind he wanted to go straight to sleep. I would try and ask him questions and he would tell me ‘mum quiet now I need to go to bed’ He wanted to tell me what was wrong, but didn’t want to talk about it.

I would lay awake and think about the things that he told me and it would break my heart knowing that while he’s in school and out of my care he was scared and upset and I wasn’t there to protect him. That night he woke up screaming ‘please get off me, don’t do that I don’t like it when you fight me’ crying and crying until I went in and calmed him down and he realised he wasn’t in school and was still at home in bed. After speaking to the teacher a few times, they said they would do a thumbs up and thumbs down routine where they would ask him how he’s feeling. She would tell me he would always put his thumbs up and smile so I thought he must be happy in school but he clearly wasn’t. He would come home and do the same thing every night cry and tell me he was scared, he didn’t want to put his thumbs down because he didn’t want to to speak to the teacher and tell her what was going on.

He would only now tell me some little things that were bothering him, like being called a baby by another child, having his bag taken off him and the child wouldn’t give it back so he got upset and they called him a baby. Now to me and you, that isn’t that bad but to a four year old boy who is already scared and frightened of being in school something as little as that is such a big deal for him. He’s told me a few kids have held him by his hood and pushed him to the floor and it broke my heart. Now, they could just be playing rough as I know what boys are like when they play. I told Josh, are you sure they aren’t just playing ‘bad guys’ or ‘power rangers’ and he promises me they aren’t but who knows what to believe. I wouldn’t say he is the most confident little boy, but he is never usually scared of anything and usually loves to play boys games and is normally happy. Seeing my little boy going from being the happiest child going in to school to now fighting me kicking hitting and screaming when I try and put him in the car is really so difficult. Do I talk to the parents to see if their child has mentioned anything? I knew a few of them as I like to talk to the parents as Im pretty sociable. So I did, but I don’t think I should of thinking about it now as I think it could be taken the wrong way like I am blaming their child when in reality I am just trying to work out what is going on, and to see if they can help me understand it better.

I don’t know how much more I can handle, I literally have to fight with him to get his clothes on. As soon as my friend comes to pick us up, he screams until I pick him up. As soon as I try and go out the door he’s pulling away, he hits the car and kicks out trying his hardest to not get inside the car. It is impossible to strap him in. I even have to get someone to hold him down until I manage to get him inside, then I have to sit next to him and cuddle him the entire journey to school. I try and ask him why he doesn’t want to go in today and he won’t tell me anymore. I ask him if people are nasty and he just shakes his head, I ask him if he doesn’t like trying to write or learn his shapes and numbers and again he will just shake his head. ‘I don’t want to go I feel sick, Im poorly, I have a headache, please mum just don’t send me’ What can I even do? I know that I can’t keep him off.

I don’t even know what it is anymore that is making him so scared. I feel like i’m one of those nuisance parents who keeps talking to the teacher and I bet she is thinking oh god not her again. I know that since him telling me about other children they have all been spoken to (including Josh now I am by no means saying he may not be playing rough too) about being nice and playing nice games and since then he wasn’t mentioning being hit or pushed to the floor so I was happy but that only lasted a couple of days. He is now even worse than he was before, he is absolutely petrified of going in to school. He has been a nightmare trying to get to sleep as he knows once he is in bed, as soon as he wakes up its time for school. The only time he goes to bed happily is on the weekend as he knows he has two days off school.

I keep asking myself what could it be? Is he scared of other children? Does he not like getting dressed by himself in PE? Is he sat crying now while i’m writing this? He gets so bad that I just want to keep him off all day, I want to cuddle him and promise him that he will be fine. He is four years old he should be going to school and having fun playing with the toys and seeing his friends. When I was studying childcare in college I did a placement at his school and the reception class, and all the kids had so much fun playing with toys and learning new things so why isn’t Josh? What is making my usually happy baby so upset and frightened? The teacher said he seems fine in school, but she has 30 other children to keep an eye on so he may seem fine but I know how scared he is and that doesn’t make me feel any better.

I honestly didn’t think I would have to deal with anything like this so early on in his school life. When you are a mum, and you have protected them for four years to hand them over to someone else and not be able to be there for them is the hardest thing in the world. I have googled cameras and microphones and everything to stick on him (obviously this is drastic and I wouldn’t do it) but I just want to know what it is that is making him so upset. My mum watches him every morning the way he is, and we both just sit and cry about it. She wants to go in and watch him all day just like I do as any mum knows you would do anything to keep your child safe and have them be happy. I know keeping him off school is never the answer, and I won’t do that but it is so hard when they are sat uncontrollable on the floor not wanting to do something and you are making them do it. His anxiety about school is getting worse as the days go on and I just want to wrap him in a bubble and keep him safe.

His biggest problem in the world should be which paw patrol episode he wants to watch first not trying anything to make me keep him home he should feel safe in school and he doesn’t so why? Again today I have spoken to the teacher and raised my concerns over how traumatised he seems to be over the thought of spending the day in school. Again I have been told ‘he seems fine’ and nothing has ‘been noticed’ but its not making me feel any better as I know Josh more than anyone and I know he isn’t fine. Being a teacher must be really difficult having to deal with so many children and watch them all, I completely understand things can get missed and its impossible to watch them all at once and the teachers are always lovely and this is is nothing against them or the school. Its a great school I went there myself, but I need to know why my little boy hates it so much. How else can I do anything to help him if he now refuses to tell me what the issue is?

It is like he is too scared to speak about it, as the last time he told me I told the teacher who then spoke with everyone. What if that made it worse and he now doesn’t want to tell me because he thinks it won’t make anything better. It is not normal behaviour for Josh to be the way he is, and to not know why he’s like it makes me feel like I am failing him. If he is ok in school and is just putting on a brave face but really wants to burst in to tears like he does when he is with me, what is that doing to him? Imagine how he must feel being so little and scared!

Does he feel upset that all the other children are more ahead than he is? He told me before he is the only one that can’t write his own name does he feel alone? Or stupid? He isn’t at all, far from it he is such a clever little boy he just gets nervous when it comes to learning something new.

I can’t wait to pick him up every day knowing he’s safe with me but it can’t carry on like this, it needs to be sorted as the longer it carries on the harder it will be to sort it out. When there is such a change in the child that you know so well, all you want to do is get them back! I just needed to write it all down to see if it would help me understand his feelings any better…

Have you ever sat and watched your child try his hardest to smile and act brave knowing he wants to burst into tears? It is destroying me!!!