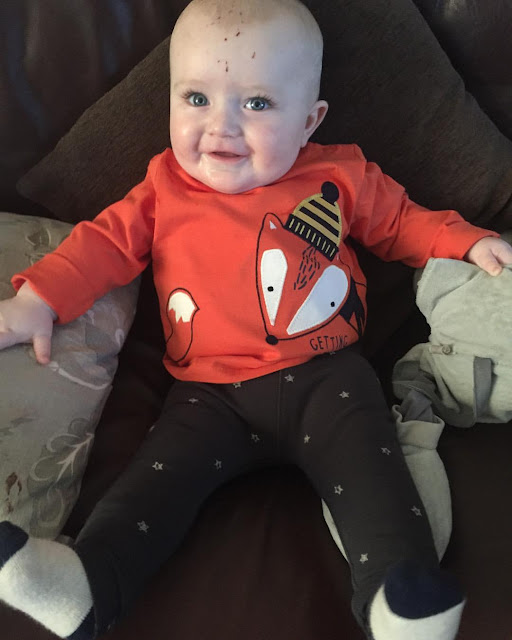 I can’t believe Freddie is 7 months old! The months just seem to be rolling in to one and he is growing at such a fast pace that I wish it would slow down! He is such a little chunk he can fit comfortably in 9/12 months which makes me sad as Josh at this age was still in 3/6 months! He is also a little attention seeking monkey, if he doesn’t get everyones attention he will shriek and shout until you start talking to him and he will start to giggle! He loves standing up on his legs he is really strong which I think is to do with his love of his jumperoo he jumps like a crazy lunatic in that thing!

He hates being on his stomach which does worry me a little bit. He finds it really hard to keep his head up and starts to panic if he’s left for longer than 30 seconds. I try and do it as often as I can to encourage him to get better but I feel so guilty. He adores Josh and Josh is the only person who can make him laugh on tap. 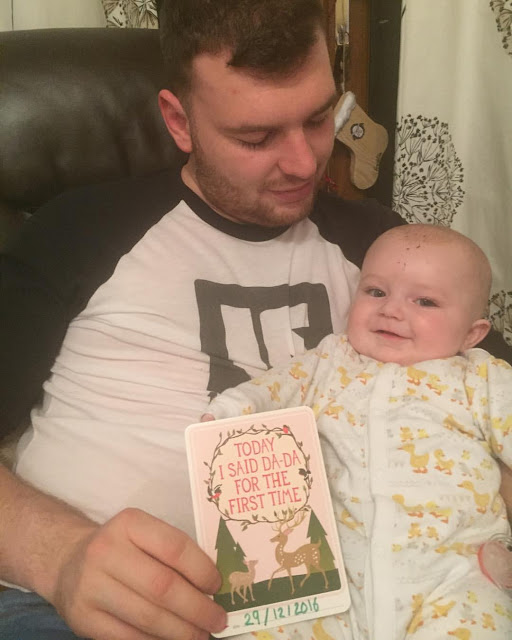 He said his first word which was of course going to be ‘dada’ because he is a complete daddy’s boy. Every time he sees him he has a beaming smile and its adorable to see. He hates being changed or cleaned with a wet wipe he has a mini meltdown! He loves being kissed, tickled and thrown in the air (not high obviously)

How is his sleeping? Well I am currently writing this with match sticks holding my eyes together… Yawnnnnn. He is such a rubbish sleeper compared to how Josh was. He started off really well sleeping all night, then he started waking up a few times for his dummy and fussing around. Now he wakes a lot and you have to pick him up to settle him and as soon as he is settled he will drop back off but wake an hour or so later! He has a really bad cough at the moment which I think is the reason he has got a lot worse lately. I hope he improves his sleeping soon as I am constantly sleepy!

I am doing baby led weaning with him and he seems to be throughly enjoying it. I didn’t do it with Josh and he is a shocking eater (lives off lasagne, pasta and jam sandwiches!) so I was adamant Freddie would be a good eater. He eats everything that we eat, I just place it all on his high chair and watch him happily try everything. He loves fish and veg! Will’s mum has heart failure whenever she watches as she thinks he will choke! I do admit I have to sit on my hands sometimes to stop the temptation of taking something out of his mouth as it is how he learns! He had an omelette yesterday which he demolished so no wonder he is in size 9/12 months already the little porker!

His reflux is still there he cries a lot when he brings up the acid which isn’t nice to watch. He lays down and you can tell its burning him as he gets so upset and as soon as he’s lifted he brings it up. I would say his sickness has improved since he has been eating as he isn’t going through as many outfit changes a day which is always good. His eczema flares up quite a lot and he is constantly scratching but we have an appointment with the dermatologist soon so Im hoping they can help us some more.

He has mastered sitting up no too! 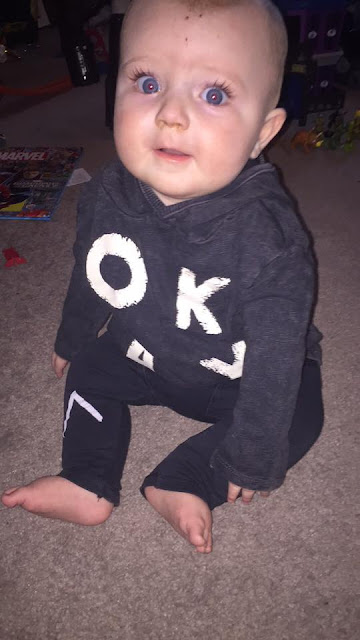 He really is quite demanding I am writing this now as he’s eating his toast in his high chair and he’s shouting at me, while Will and Josh dance around the room to the boys are back in town. I wouldn’t change him he’s a little character who idolises his big brother!